Tony Day was born and raised in Admiral Sask, he moved to Carnduff for work in 1956. In 1957 Tony bought a 1955 Chevy water truck to haul fresh water to the drilling rigs and that was the start of Fast Trucking…

On December 14th, 1960 Tony married Vi Bayliss, they made their home at the rig for the first 4 years of their marriage and lived in a small house trailer. Their front yard changed with every rig move, sometimes it was pastureland, summer fallow, or a stubble field.Tony bought his first winch truck in 1958 to help with rig moves and the Fast Trucking fleet continued to grow. In 1961 he bought a 1952 Kenworth bed truck, and a few years later he bought a Mack gin pole truck.

Tony and Vi started their family in 1963 when their first daughter Linda was born, a year later they welcomed their second daughter Teresa. That same year they moved their house trailer to the Bayliss yard and for the first time they had a yard with green grass. In 1966 their first son Dennis came along. In 1969 they moved the trailer to an acreage west of Carnduff to make it easier for the kids to go to school and take part in after school activities. In 1970, Larry was born and that completed the Day family.

The first Fast shop was Quonset moved onto the acreage, as the company grew, they added three additions onto the shop.

In 1972 Tony bought a 1966 International truck and made it into a bed truck, he lengthened it twice and made it into a triaxle. “Gerta” as it is known, is still to this day the Queen of the fleet. Tony, Vi, Dennis, and Larry all drove “Gerta”, as did many other employees.

Tony was a man of many talents, welding, repair work, farming & whatever jobs he could do with his bed truck. He helped move rigs when needed and he also did some building moving.

In 1977-78, Tony decided to start moving rigs with the help of a few trucking companies. He organized the rig moves and the rig moving and supervising. It wasn’t unusual to move up to 2 or 3 rigs with the same fleet of trucks in 1985. The day didn’t end when the rigs were moved, there was repair work to be done until all hours of the night.

In 1979, Tony bought a cat to assist on rig moves, lease construction and clean up. This was the beginning of Day Construction. They added more cats, graders, buggies, hoes, and excavators as needed.

Tony was a big supporter of Ritchie Bros Auctions, most of his equipment came from those sales. Tony and his good friend Rick Hayward attended many sales together, and it eventually became something Tony and Dennis did together.

The year 1985 proved to be an extremely busy year for Fast Trucking. We moved 800 rigs that year, only owning 24 trucks ourselves, but with the help of some local trucking companies we were able to get them all moved. Fast purchased 5 more trucks that year.

In 1995, Fast purchased a 41,000sq foot shop from Coronach Sask, and had it dismantled and rebuilt in Carnduff. It has in floor heat which is a real treat for the employees.

For 20 years Tony dreamed of putting up a wind charger to generate power. His dream came true in 1977. Although the power it generates is minimal, it makes for a great conversation piece.

In 2004 Fast Trucking purchased Sam’s Trucking, and in 2020 we purchased Stage Oilfield Hauling. We are proud to say we are a hands-on team with over 150 employees within our companies, and 85 trucks.

Tony had two Major highlights in his career. One – being awarded the 1999 South East Oilman of the Year at the Weyburn Oil Show. He had his first rig moving truck restored for this special occasion. Two – when the community arranged a roast in his honor as a school fundraiser. The Carnduff Education Complex Library is named the Tony and Vi Day Resource Center in their honor.

One of Dennis’ highlights of his career was being awarded the 2019 South East Oilman of the Year. The same award Tony won in 1999.

On behalf of all of us at Fast Trucking – Vi, Linda, Teresa, Dennis, Larry, and our families, we would like to thank our employees, our customers past and present and our friends. If not for your hard work, dedication and support, Fast Trucking would not be where it is today. Thank you! 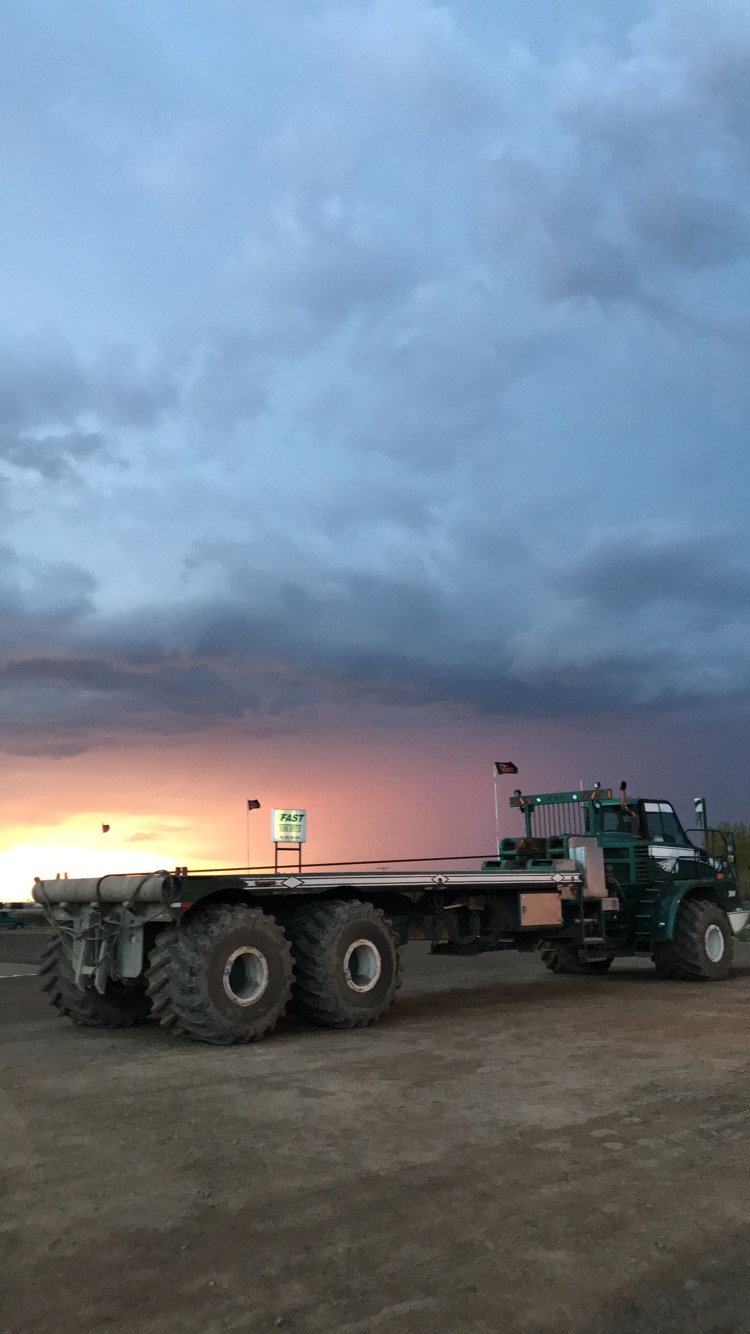